Vietnam, a blend of oriental mysticism and French romance, is a well-known tourist destination in Asia. Top 10 Attractions in Vietnam will lead you to the highlights of Vietnam which you should never miss during you tour in this charming country. Where to visit in Vietnam? Let's take a look at the top 10 tourist attractions in Vietnam. 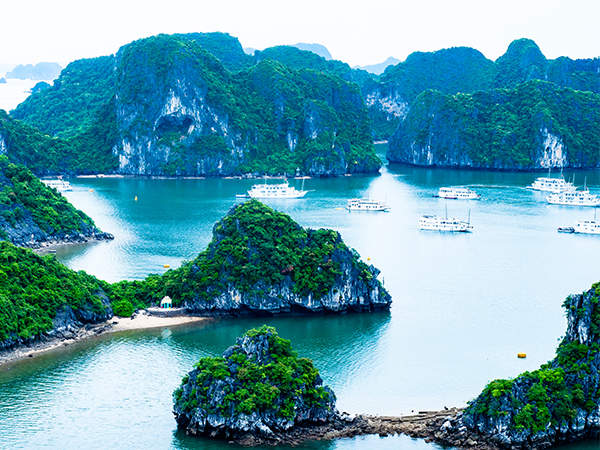 Halong Bay, known as Vinh Ha Long in Vietnamese, is literally translated as “Bay of Descending Dragons”. Ha Long Bay is situated in Quang Ninh province of north Vietnam round a 120-kilometer-long coast line, which is considered as one of the most beautiful spots in Vietnam. Halong Bay was twice declared as a World Natural Heritage Site by UNESCO.

Halong Bay contains about 3,000 rocky islands and earth islands, typically in the form of jagged limestone columns that extend out of the sea, as well as caves and caverns that together create an exotic landscape. A variety of marine and terrestrial mammals, crocodiles, fish and birds can be found in waters and tropical forests. 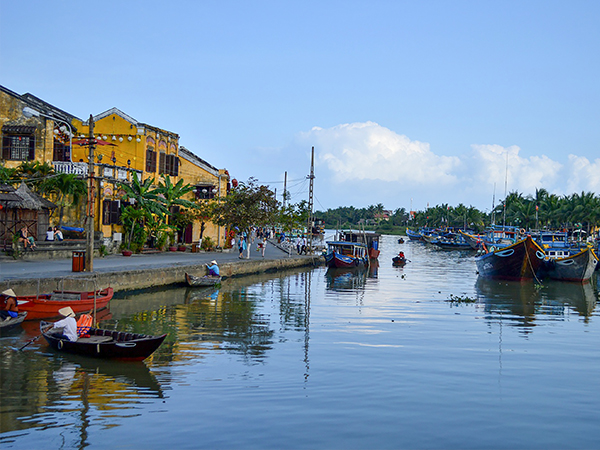 Hoi An Ancient Town is located on the north bank of the Thu Bon River in the suburbs of Da Nang, central Vietnam. There are complete Chinese-inhabited streets in the ancient city, which are full of Chinese and Japanese buildings, such as Japanese covered Bridges and Chinese-styled shops. The buildings reflect the fusion of Chinese, Japanese and Vietnamese culture and architectural styles. It was listed as a UNESCO World Heritage Site in 1999.

Hoi An is sometimes called the “Venice of Vietnam” because of the narrow canals that cut through part of the town. The beautiful and tranquil environment here allows people to unconsciously slow down, relax, taste the ancient charm of the old city, explore the slow life culture of Vietnam, and enjoy a period of time.

Located in Hanoi, the capital of Vietnam, Imperial Citadel of Thang Long is a unique place where human culture, sculpture, architecture, construction technology, urban planning, landscape art and other values have intersected in the past 1,000 years. In 2010, Hanoi’s Thang long Imperial City was listed as a UNESCO World Heritage site.

The ancient citadel was the political centre of the country for 13 consecutive centuries and served as the capital of Vietnam for eight centuries. The imperial city was built in the 11th century and was the symbol of the independence of Dai Viet. The architectural relics include foundations, column footing, as well as traces of drainage systems, wells and lotus ponds, which show the huge scale and specific features of Thang Long imperial citadel in the past.

Hue Imperial City is the royal palace of the Nguyen Dynasty that is set along the northern bank of the perfume river in Hue. Complex of Hue Monuments is quite spectacular, which is the largest and relatively complete ancient architectural complex in Vietnam and represents the highest achievement of ancient Vietnamese architectural art. In 1993 UNESCO acknowledged the Complex of Monuments of Hue as a World Cultural Heritage Site.

The most important part of the complex of Hue Monuments is the Imperial City. The Imperial City used the architectural drawings of the Forbidden City in Beijing, so it looks like a miniature version of the Forbidden City in Beijing. The Hue Imperial City is square, each side is about 2.5 kilometers long and surrounded by a moat. The city wall is 8 meters high and 20 meters thick, all of which are brickwork. There are a total of 10 gates, each of which is about 16 meters high. It is worth noting that when you visit the ruins of the ancient capitals, you must dress properly and be neat. 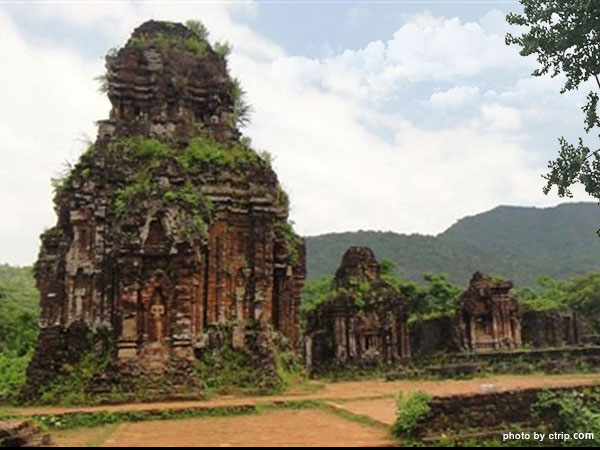 My Son Sanctuary, known as the "Little Angkor", is the largest champa kingdoms religious site in Vietnam, along with the equally famous as the Borobudur site in Indonesia and the Pugan Pagoda in Myanmar. It was an independent state from around the 2nd to the 17th century, at which time it was occupied by Vietnam.

The Champa Kingdom has built about 70 beautiful buildings with stone or wooden structures, making it once the most significant Hindu holy place in the Kingdom of champa. However, after being bombed by the US military in the Vietnam War in 1969, only 20 of the 70 temples and ancient towers survived. In 1999, UNESCO listed the My Son Sanctuary as a cultural heritage on the World Heritage List.

The formation of karst landforms in Phong Nha-Ke Bang National Park began in the Paleozoic (about 4 billion years ago) and is the oldest karst landform in Asia. The limestone here is discontinuous, with an illuvial horizon of shale and sandstone mixed in the middle, and together with the slate and granite in the area, forming a unique terrain.

The park is riddled with hundreds of deep caves, including one of the largest in the world – Hang Son Doong Cave. It contains a cavern so tall that a skyscraper could fit inside it. Phong Nha-Ke Bang National Park is a popular option for adventurous travellers looking to explore its many limestone caves and grottoes.

The huge sand dunes are one of the most attractive landscapes of Mui Ne, and the white sand dunes are more spectacular than the red sand dunes and are well worth a visit. The endless dunes rise and fall in an elegant curve, like a miniature desert. Here you can feel the freshwater lake in the depths of the desert. The lake is surrounded by tall and deep tropical jungle vegetation.

Another interesting activity is kite flying as well as catching the beautiful sunset here. If you are going to see a magnificent "desert" sunrise, be sure to check the weather forecast beforehand to avoid a cloudy day. Because the location of the white sand dunes is relatively remote, usually 4:00 is about to start. Pay attention to sunscreen, even if you don't watch the sunrise, it is recommended to go as early as possible, because during the day, especially at noon, it is very hot. 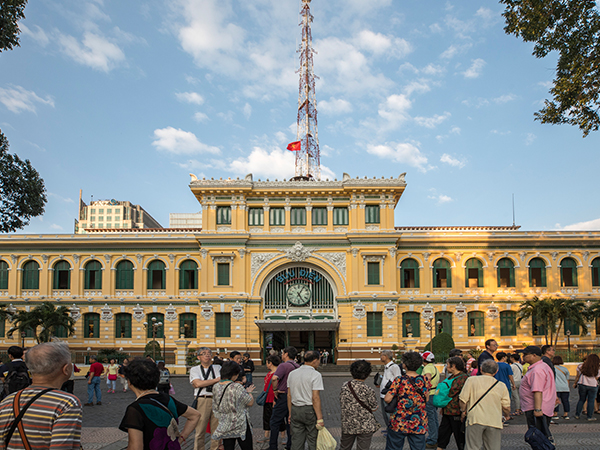 Today, the Central Post Office is a famous landmark in Ho Chi Minh City. Many people come here every day, and sending a postcard back to the country is almost something that every visitor will do. The exterior of the post office looks like a grand station at first sight. If you look closely, you will find its elaborate design and decoration everywhere. 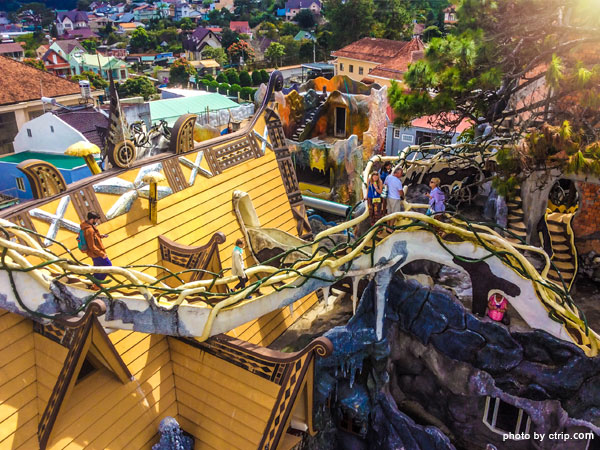 The crazy house is arguably the most famous building in Da Lat, and its exaggerated and bizarre shape blends with the natural environment of the four seasons. Visit the Crazy House, you can walk in the tangled "dry wood", rest in the "giraffe" belly, or get lost in the huge "spider web", just like Alice in Wonderland.

The Crazy House is actually a hotel designed by Dang Viet Nga, the daughter of former Vietnamese President Truong Chinh. The glass skylight in the top floor room is located directly above the bed. At night, you can look up to the stars, and all the rooms have water and electricity, but you can't see a water pipe and wires. All of this reflects the designer's ingenuity. It is a rare experience to stay and rest in such a wonderful place.

Located on the outskirts of the eastern part of Da Nang, My Khe Beach is rated as one of the six most beautiful beaches in the world by Forbes magazine and also known as the most worthwhile beach in Asia. If you go for a beach, only My Khe Beach will be enough for a trip to Vietnam.

However, with the significant increase in popularity, My Khe Beach is no longer a quiet place for tourists to visit. The soft sand and clear water are still enough to impress you, especially when the sun is shining, the sea view is particularly stunning. There are many seafood restaurants nearby, which are very popular. 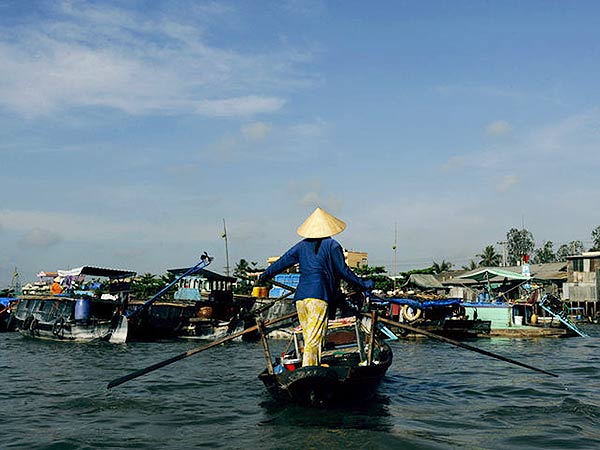 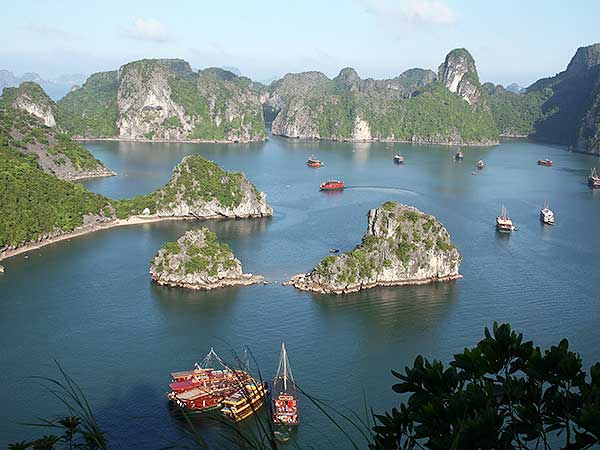